WGBH chats with David Duchovny about his lifelong passion for writing and his upcoming novel, Miss Subways. 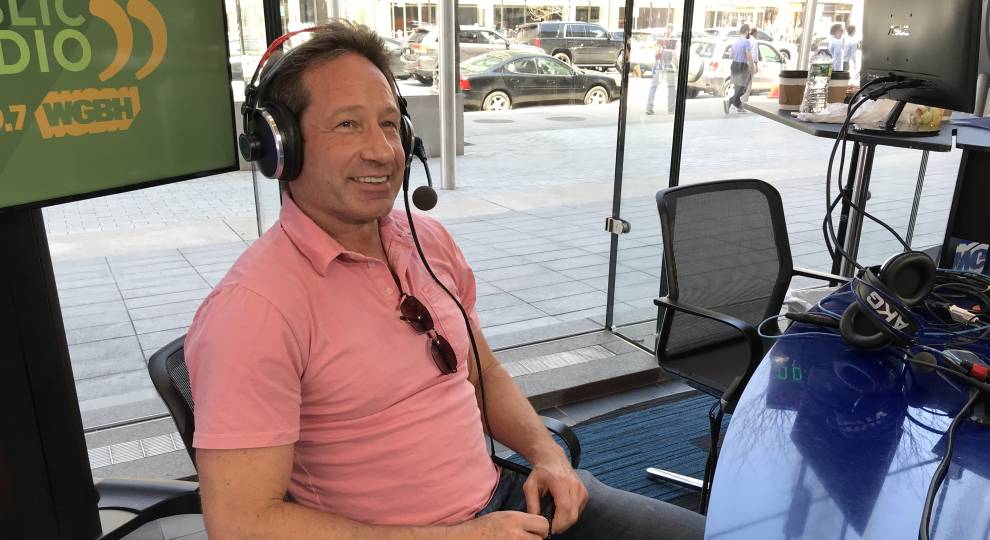 You may know David Duchovny from his roles as Agent Fox Mulder in “The X-Files” or Special Agent Denise Bryson in “Twin Peaks,” or myriad roles in television and film — yet Duchovny’s acting experience came to him as a result of his true passion: writing. The actor, singer and bestselling author joined Boston Public Radio to discuss his third and latest novel, “Miss Subways,” a re-imagining of an Irish myth set in modern-day New York City.

Jim Braude: Some critics are characterizing it as a “post-modern fairytale” but mystical might be a more apt adjective, because how can anything be “postmodern” now that the former host of “Celebrity Apprentice” is the president of the U.S.?

David Duchovny: I guess the dumbest period-naming would be “modern,” because then you go post, and then what, do you go post-post-modern after that? The only worse name of a period was “contemporary,” because how can you be “post-contemporary?” You’d have to go to the future. There was contemporary fiction about 20 years ago — now that’s post-postmodern.

JB: I got it. Could you repeat any of that? Or…

Margery Eagan: He went to Princeton and Yale, we didn’t, you see.

DD: I like to think I’m starting the pre-post-contemporary…

JB: I think you’re the man for it.

ME: Tell people — what’s the basic premise of “Miss Subways”?

DD: I guess the idea that stayed with me was, when I was a graduate student I saw a W.B Yates verse play called, “The Only Jealousy of Emer,” which stars Cú Chulainn, the mythical Irish king and his wife, the Queen Emer. An Irish demon, a sidhe, comes to Emer and offers her this wager and says, ‘Your husband, the king Cú Chulainn, is about to die in battle, but you can save him.’ She says, ‘How?’ And he says, ‘You have to renounce your love for him.’ When he wakes up from this dream of almost dying, he will not know you, he will not know that you have children together, he will never know you and you will never know him. And that always struck me as a very romantic notion — [laughs] — like darkly romantic, and I modernize it into an contemporary time, present day, and just try to tell that fairytale, that myth, within the context of New York and the subway system.

JB: I lived in New York for 15 years, a long time ago, you captured the subway experience as precisely as anybody I’ve ever read — how big a part of your life, as a kid, was the subway?

DD: Oh, it was. I grew up on 11th street and 2nd Avenue and I went to high school on 77th and Broadway, so I took the subway at least twice a day. It’s just in my mind, I haven’t taken it a lot recently, it’s a lot nicer now. When I was a kid it wasn’t so nice.

Listen to the full conversation on WGBH’s website here.