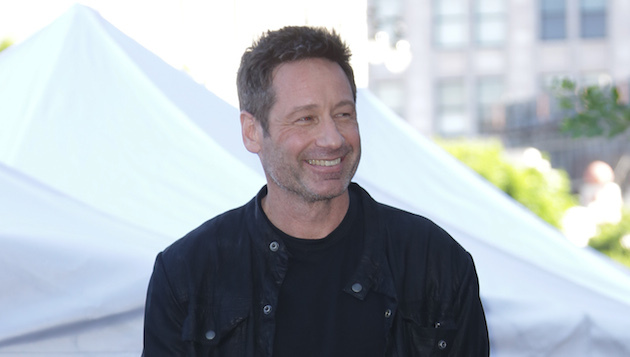 You know David Duchovny, the Golden Globe-winning actor who starred as FBI Agent Fox Mulder on the TheX-Files (including this year’s reboot), as debauched novelist Hank Moody in Showtime’s Californication, and as retro cop Sam Hodiak in NBC’s ‘60s drama Aquarius.

But, probably, you didn’t know that last year his first novel, Holy Cow, earned critical acclaim. Or that Duchovny now has written a hilarious and deeply touching second novel, a rites-of-passage tragicomedy set in 1978 New York City during the months leading up to one of Major League Baseball’s most legendary pennant-race finales.

In Bucky (Expletive) Dent (Farrar, Straus and Giroux, 304 pp., **** out of four stars), Ted Fullilove is a thirty-something stoner, Deadhead and Ivy League grad, living in a vile Bronx tenement. He drives a beat-up green Toyota Corolla, hasn’t had a sex life since college, and sells peanuts at Yankee Stadium to pay the rent. Fans know him as “Mr. Peanut.”

Ted thinks of himself as more of an underachieving eccentric than a loser, due to his one passion: He’s struggling to write the Great American Novel. But mostly he’s just struggling.

That all changes one night when a nurse calls to tell Ted his long-estranged father, Marty, is dying of lung cancer and only has a few months left. Ted hasn’t talked to Marty or been back to his childhood Brooklyn home where Marty lives in years.

At the hospital, Ted meets Mariana, the beautiful Puerto Rican grief counselor who called. Ted and Marty resume their toxic relationship — except scene-stealing Marty shows signs of reaching out in his cynical, cantankerous, profanity-laced way. So does Ted.

Duchovny masterfully turns the plot around Marty’s final fantasy. Once a hotshot advertising pioneer (think Mad Men), always a lifelong Boston Red Sox fan, Marty is convinced he was conceived the night the Sox won the 1918 World Series. Same year, the Sox sold Babe Ruth to the Yanks, incurred “The Curse of the Bambino,” and then failed to win another Series. Now, with the Sox way ahead in the American League standings, Marty is convinced he cannot die until the Sox win it all again.

When Ted moves into the Brooklyn house to care for Marty (and see Mariana again), a poignant and powerful story of father-son reconciliation and redemption unfolds. While the literary air is heavy with insight into death and dying, sins and forgiveness, family and fatherhood, love and sex, Duchovny’s compelling narrative and clever dialogue make it feel weightless, even uplifting.

Near the end, Marty reveals a life-changing truth to Ted. They’re driving back to Brooklyn from that famous Championship tie-breaker at Fenway where, with one fateful swing, the least likely Pinstriper added the term “Bucky (Expletive) Dent” to Red Sox faithful lexicon forever.

Not a baseball book any more than Field of Dreams is a baseball book, this moving, beautiful novel resonates with laughter and tears throughout. It will make you want to see your father, have a catch, or a conversation — or wish you could.