A writer for The Spinoff recounts their experience at David Duchovny’s concert in New Zealand. 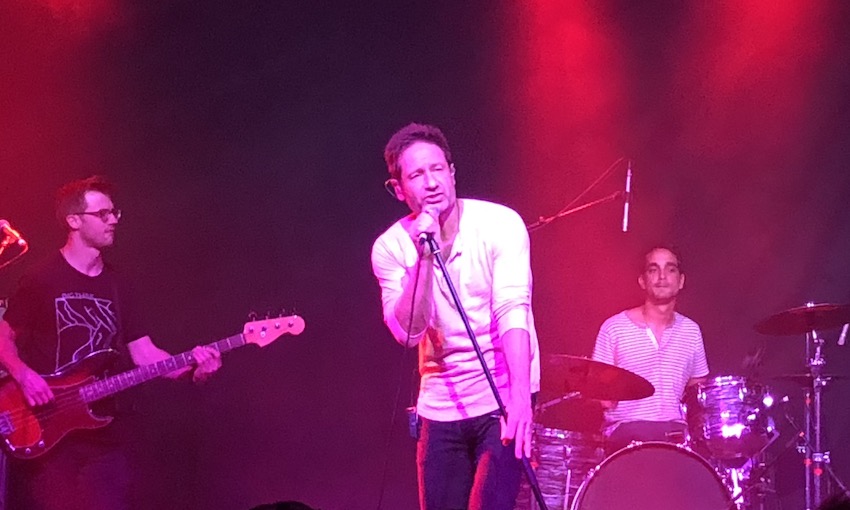 There was a moment towards the end of David Duchovny’s concert – his first gig in New Zealand, and his first time in New Zealand – that beautifully summed up the whole night. It was during the encore: crowd clapping and yelling, Duchovny shuffled to the mic and, feigning modesty, gestured away the applause. He knew they were clapping for Fox Mulder, Hank Moody, Jake Winters and Sam Hodiak. He knew some of them were clapping for Denise Bryson.

But the thing is, people were clapping for David Duchovny too. David Duchovny and his music. With two records behind him, some people were there for the music. “Jericho!” pleaded someone in the front row, desperate to hear a song off his latest record Every Third Thought, before being overtaken by some drunk, slurred yelling.

“That must be some of that fine New Zealand wine I’ve been hearing about,” he replied in a dry, Hank Moody-esque fashion, before saying something that struck me as, well, sort of special: “I’d like to sing this song for you, but I can’t get up that high… so it’s Colin that’s going to sing this for you.”

This was a man fully aware of his musical limitations. He wasn’t some arrogant LA actor with delusions of musical grandeur – he knew he was just a dude, who was lucky enough to be playing his tunes in front of a happy, paying crowd.

And so for the next four minutes, David Duchovny had absolutely nothing to do, except to gently dance around on stage, gesturing and smiling at the audience. It was actually really beautiful, and one of the nicest concert experiences I’ve had in some time. And hey, the cover wasn’t too bad either.

I went to the concert alone; none of my friends were too keen on this particular musical experience. Duchovny’s music has been described by some as “dad music” or “dad rock”, I suppose because it’s the sort of stuff your fuddly old dad might make. But then Duchovny is a dad, so I don’t really see the problem.

And going solo to a gig can be liberating – you get to meet a lot of people.

I bumped into Steve, who once flew all the way to England for one day just to meet David Tennant at a convention. He’d paid $250 for a private meet-and-greet with Duchovny before the concert. He got his favourite poster signed. He said there were about 60 people who had done the same thing, so time with Duchovny was limited. “He was really cool though,” said Steve.

I talked to 34-year-old Sian, whose husband didn’t want to come to the concert. She was there to support her friend Jam, who had been in love with Duchovny ever since Red Shoe Diaries. “He’s not terrible,” said Sian.

I chinwagged with Sarah, who had also met Duchovny earlier that day. She’d gotten him to sign a Piper Maru model her friend Dean had made. Dean wasn’t well enough to be at the concert, so was over the moon his model got signed.

And I laughed with Leigh Hart of Screaming Reels fame, who was there for the music. “It’s quite good,” he told me gruffly, before noticing the lighting guy was watching a YouTube video of some squirrels.

So while the concert might not have been packed out, it was full of wonderful people who were attentive, fun and kind.

I talked, chinwagged, bumped and laughed. I don’t think I’ve ever met so many nice new people on one night. “You’re a modest crowd, but a good crowd. A really good crowd. I mean that,” offered Duchovny. He was right.

At some point, I swanned over to the merchandise table, and purchased a red t-shirt and a white pillowcase. I asked how things had been selling. “Really, really well,” said the lady behind the desk. “Better than heaps of our concerts.”

As I looked up at Duchovny doing his thing, it was clear he was having a great time. He knows he’s doing this thanks to the adoration he’s garnered in other facets of his life. For me, it was watching The X-Files during intermediate, high school and my terrifying first year away from home. I suppose it’s been the last few years as well, with The X-Files revival.

I guess you could say I was fan-ing out. I felt like I was soaring, being in the same room as this actor who’d made such an impact on my young mind. Fox Mulder made being a nerd at school acceptable – even sexy, somehow. Back in the 90s, that was pretty amazing.

And you know what? The music was okay, too. He’s got a tight little band around him. His keyboardist produced his last record. Except for a glorious moment of cowbell, David Duchovny didn’t play a single instrument the whole night, simply holding the crowd with his voice, his overly earnest lyrics, and a healthy dose of charm.

It was a great fucking night, and I’m so glad I went alone.