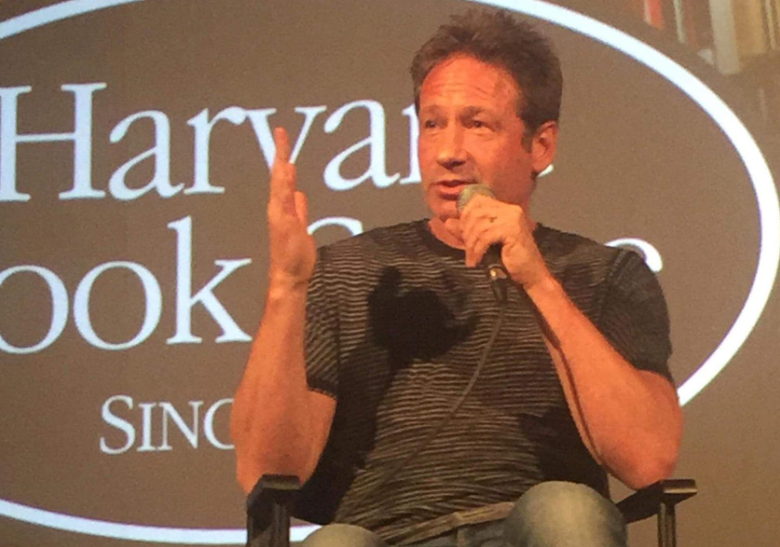 For anyone who has ever watched “The X-Files” and thought ‘This is great but it could use a little bit more Yeats?’ “Miss Subway” is the “unputdownable” book for you.

David Duchovny, the actor best known for playing Fox “Spooky” Mulder on “The X-Files,” has weaved together a modern-day literary yarn loosely based on Yeats’ take on the Ulster Cycle of Irish mythology.

Believe me it’s not as unfathomable as it sounds. In actuality, it’s the absolute opposite. And you don’t have to be suffering from a bout of the “Mandela effect” or the “Mengele effect” or be a recovering English major to makes sense of it all. Think of “Miss Subways” as Duchovny’s first case on The X & Y Files, with the “Y” not standing for “Yeti” but for “Yeats” instead.

During a recent Harvard Book Store-sponsored book talk and signing at the Brattle Theatre in Cambridge, Duchovny said he was a graduate student at Yale when a friend dragged him to an undergraduate production of Yeats’ verse play “The Only Jealousy of Emer”.

“I don’t know if any of you have ever seen any verse play performed but I don’t recommend it all,” Duchovny told the crowd. “It’s like watching a poem not happen for two hours.”

Duchovny explained the play centered around Cu Chulainn, a mythical Irish king, and his wife, Queen Emer. A fairy demon, one of the Sidhe, tells Emer that the king has inadvertently killed his own son in battle and, being so distraught over what he has done, has gone into the ocean to fight the waves.

“He is going to drown. He is going to die. But you can save him, Emer, if you renounce your love for him,” Duchovny said in the guise of the Sidhe. “If you renounce your love for him, when he wakes up in the morning, he will not know that he ever fathered any children with you and he never knew you. He never loved you and he’ll never love you again.”

The magnitude of Emer’s sacrifice not only woke Duchovny out of his bored, graduate-student stupor, the story stuck with him throughout his life.

“For 30 years, I’ve been thinking about that wager that this demon gave this queen,” Duchovny said. “And, somehow, as time goes on, other bits of story attached itself to it and I brought it down to the subways which seemed mythically appropriate to use, an underground woman and underground man, and also to retell the story in a way, from the woman’s point of view, of the queen actually making the wager, rather than just being the subject or the object of the wager.”

In “Miss Subways” (published by Farrar, Straus & Giroux), Emer Gunnels, a 41-year-old New York schoolteacher, is given an offer by “Sid” (think the doorman from hell) to save the life of her writer boyfriend (nicknamed “Con”) by never being a part of his life.

Harvard College Professor Maria Tatar, the moderator of the event, pointed out that “Miss Subways” is mainly channeled through the consciousness of the female character and tells the story of Emer, a story that often is not told, which, she said, reminded her a little bit of an element in the Tony Award-winning musical “Hamilton.”

“I guess I could do worse than to be compared to ‘Hamilton,’” Duchovny said. “Just like “Hamilton”. Would you put that on the book?”

In a recent New York Times interview, Duchovny said he wants to be “part of the solution” when it comes to the “Me Too” movement. And, Ms. Tater said she picked up on that also, while reading “Miss Subways”.

“Keep in mind. This has been done for a year, so this was written before there was ‘Me Too’ movement,” Duchovny said. ”‘Me too,’ I would have considered to be like a selfish thing somebody would yell on the street at that point. That’s all changed. I watched first in horror and then interested how the world would change by the time this book came out.”

As a result of the “Me Too” movement, Duchovny said he had to make some last-minute revisions in his novel.

“I had savaged Bill O’Reilly in the original draft, just physically, psychically, and every way I could to destroy that (expletive). Then the world took him out anyway so I couldn’t just pile it on,” Duchovny said. “And, the same thing happened with Charlie Rose. I had Charlie Rose in there. Here is still in there but I had to rewrite what I had written about Charlie Rose. That’s what happens. That (expletive) moves so quickly now. That’s why we read newspapers and not novels.”

As for his work ethic, Duchovny confesses that he’s not a perfectionist.

But, Duchovny is obsessed with his own mortality.

“Certainly, I think a lot about death, not in a morbid way, in a nice way. I have this app on my phone called ‘WeCroak’ and it reminds me six times a day, ‘Reminder, you’re going to die.’ I like it,” Duchovny said. “It’s very funny when I’m out with my kids and they look at my phone. ‘Reminder, you’re going to die?’ Yeah, your dad’s a solid dude.”

Duchovny credited acting, especially acting on “The X-Files,” for teaching him a lot about writing.

“I got into acting because I wanted to write plays,” Duchovny said. “Having been acting for over 30 years now, I think I have a pretty good sense of dialogue … And, honestly, just being on ‘The X-Files’ for so long, I’ve learned a lot about plot.”

The author of three books (including 2015′s “Holy Cow” and 2016′s “Bucky (Expletive) Dent”), Duchovny said he hopes his books serves as a revelation to his kids when their old man is gone.

“I want you all to read it. And I want everyone in the world to buy it. I want it to be a best-seller and all that (expletive),” Duchovny said. “But, I think, ultimately, a lot of times I sit there and think, I hope when I’m dead my kids will read this and know who I was.”