Ramzine covers in detail David Duchovny’s recent performance in London as part of his European tour. 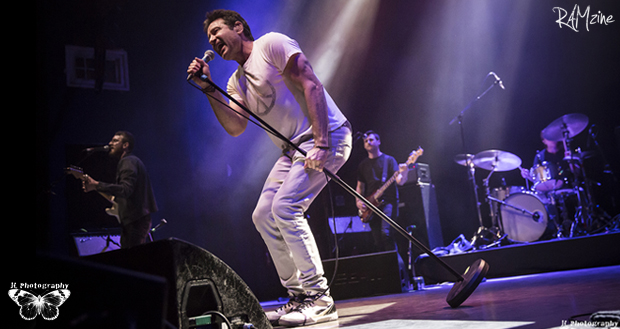 Actor, writer, producer, director, novelist, and singer-songwriter. Whether you are into music or into cinema and TV, there’s no way you wouldn’t have heard of David Duchovny. Tonight Shepherd’s Bush is hosting a unique event as David has embarked in a long European tour called Every Third Thought. The name comes from his latest album released last year which followed the success of Hell Or Highwater. This man definitely didn’t need to follow the usual procedure of chasing labels or handing out demos. People already knew him because of his many characters on the big screen and some of the public probably decided to attend his gig to see agent Fox Mulder or cheeky player Hank Moody on stage. As much as this could sound like an easy route for David, it also leaves space for music critics to question his talent which is absolutely unfair to David as a musician. Approaching gigs like this with an open mind is always the key. From what I heard on CD his music sounds heartfelt, genuine and effortless. On the other hand there’s no element of surprise, in all honesty nothing too innovative comes out from it but we have to remember that this is not an 18 year old guy who dreams to make it big in the music business. David took his first guitar lessons as an adult during the making of ‘Californication’, although he’s mostly self-taught it’s impressive to see this man having such a brilliant control of his voice on stage. Surely those vocal lessons he has admittedly said to have taken have eventually paid off.
It’s officially time for the main act and Duchovny starts his set on time and with a song from the new album titled ‘Spiral’. Shepherd’s Bush is an all seated venue tonight but on the lower level every single person is standing up, clapping and dancing. “Thank you London, this is the last night of our tour” says David before playing ‘Every Third Thought‘, a great representation of his latest record because of his assuasive yet catchy sound. Third on is the vibrant ‘3000’ from the album Hell Or Highwater. Looking at the public, it’s clear that fans are fully hooked, women in particular. It’s no secret that Duchovny has always been seen as a sex-symbol, he keeps himself well but the most attractive thing about him is his culture. He’s extremely intelligent and it shows when he speaks so eloquently to his audience. He has got only two albums to exhibit tonight but somehow it’s enough. He knows how to make this a broad show because he’s charming and funny and this formula definitely works. At times he even looks like he’s performing to an empty room due to his unique way of getting lost in what he is doing and this is one of his strengths. He doesn’t need to impress his fans with perfection as no one is there to listen to a seasoned singer hitting all the high notes. Instead we are all here to have a good time and everyone seems to be enjoying themselves. David has a superlative stage presence, even when he comes across as kinda shy at times, it all makes sense and it’s all part of a successful and genuine delivery of his work. What’s most surprising is the way he constantly moves on stage and waves at his fans, he doesn’t like to stay still. When I pointed it out to him after the show David funnily replied that “sometimes you just need a good pair of sneakers”.
Tonight he also includes two covers ‘Stay’ by Bowie and ‘Burnin’ For You’ by Blue Oyster Cult with the latter being performed later in the encore. Both are well executed and David succeeds in maintaining his distinctive approach when giving his own interpretation. During the gig he makes the audience sing ‘Happy Birthday’ to his keyboard player who was turning thirty and then calls his tour manager Kerry Lee on stage to kindly thank her for all the hard work she had put in this tour. The night concludes with David singing ‘Half Life’ right in the middle of the public and if that wasn’t enough he performs a magnificent encore which includes ‘Let It Rain’, ‘Burnin’ For You’ and ‘When The Whistle Blows’. But it’s not the end, really. In fact David comes back for an extra song, a treat for London who gets to hear an excellent cover of The Velvet Underground ‘Sweet Jane’. The band leave Shepherd’s Bush super enthusiastic and energised by what they have seen. Tonight this multi-talented man has cleverly surrounded himself with a very skilled band who has accompanied the singer in a magnificent way throughout the show, however David’s command of the stage is his strength and it’s the main reason why he is a show stealer. As he waves goodbye, his fans are applauding him copiously and definitely hoping for him to come back soon.