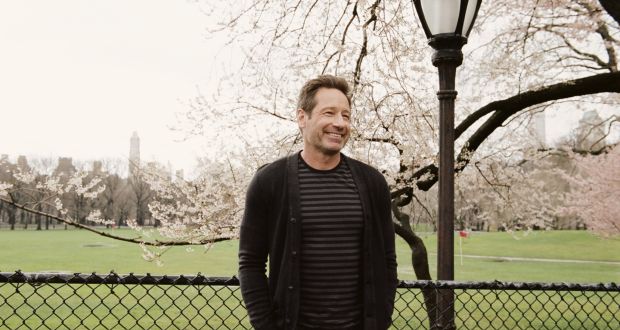 “When I was at Yale in graduate school, a friend of mine brought me to see a play that the undergraduates were doing, and it was ‘The Only Jealousy of Emer,’” David Duchovny recalls one rainy day over lattes at Tavern on the Green in New York City.

“It’s a verse play, so it’s kind of unwatchable. But I got the gist of it, which was a very cool wager about love, and it stayed with me forever.”

Naturally, since this is Fox Mulder of The X-Files, there’s a supernatural element and a parallel universe. And since this is also Hank Moody of Californication, there’s some drinking and womanising, too.

In the Ulster Cycle of Irish mythology, Emer and the warrior hero Cuchulainn fall in love and marry after trading cryptic riddles.

The Yeats play conjures a moment when Cuchulainn inadvertently kills his own son in battle and then, distraught, begins fighting “the deathless sea” and almost drowns. A demonic Irish fairy, called a Sidhe, appears and offers Emer a cruel bargain: If she gives up her fondest hope that the warrior will tire of his mistress — also at his sickbed — and grow old with her, the fairy will let Cu Chulainn live.

After agonising over the choice, Emer finally says, “If he may live I am content.”

In Miss Subways, published by Farrar, Straus & Giroux, Duchovny modernises this myth into the tale of Emer Gunnels, a 41-year-old New York schoolteacher who likes to take the subway and eat ice cream and make love with her boyfriend, Cuchulain, a writer known as Con.

But a troublemaking pint-size doorman, Sid, who is a Sidhe, shows up at her apartment with a cruel bargain: Emer can save her boyfriend from being hit by a car outside Nobu, where he is out flirting with another woman. But Emer has to give him up, along with her dream of walking arm in arm with Con on the beach when they are old.

He dropped out of Yale before writing his Ph.D. dissertation, which was to be “Magic and Technology in Contemporary American Fiction and Poetry.” (His senior thesis at Princeton was titled “The Schizophrenic Critique of Pure Reason in Beckett’s Early Novels.”)

Like his 2004 movie, “House of D,” which he wrote and directed, his new novel is a meditation on his hometown — “So much of New York involved looking away” — and his heroine, Emer, has many of the same traits as Duchovny.

Like her creator, Emer has green eyes with different-sized pupils, which reflect “some charismatic, universal, lighthearted melancholy, like she saw things at a distance, a gently ironic remove.”