Flavorwire talks to David Duchovny more on how he feels about being a celebrity-musician. 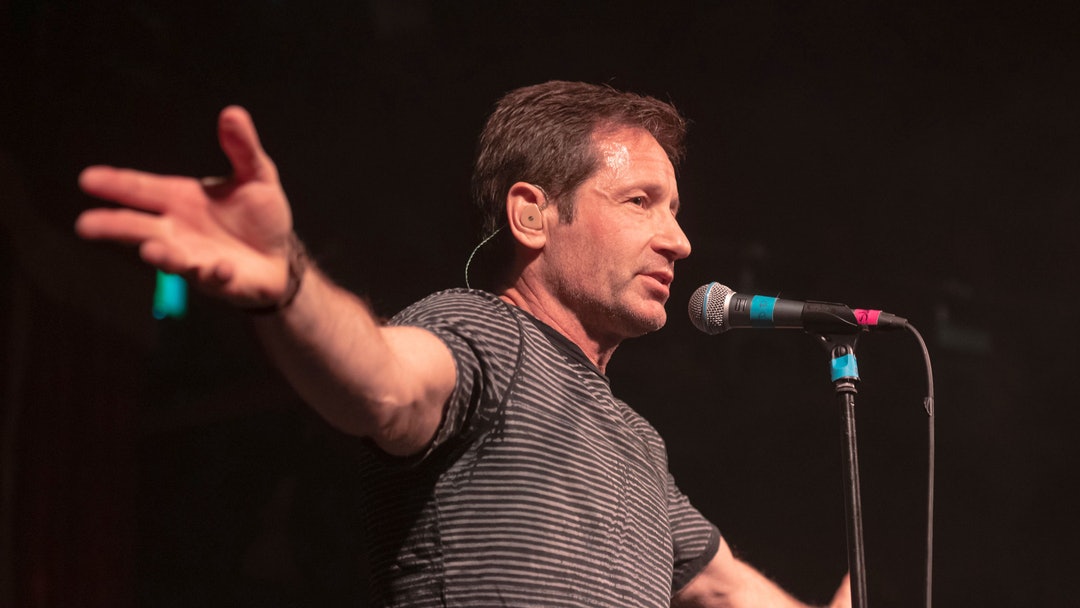 “I’m not an idiot,” says David Duchovny, “I know why I get to do it. But that doesn’t mean the music sucks.” Duchovny, best known for his portrayal of Special Agent Fox Mulder in The X-Files and Hank Moody in Californication, has taken a quick break from acting and embarked on a short concert tour where he’s been performing original music. Famous actors starting bands is almost a punchline at this point — from Keanu Reeves’ defunct Dogstar to Taylor Momsen’s The Pretty Reckless — but in our interview Duchovny is remarkably self-aware and humble about his music.

It isn’t surprising to learn that most of the fans I chat with outside of Duchovny’s New York City show at The Marlin Room last week are there because of his acting. His two most famous roles — especially Agent Mulder, which he’ll reprise in January, when The X-Files returns to Fox — have inspired legions of devoted fans: Julia, my guest for the concert, has prepared for the occasion with X-Files nail art, while Kevin, a young man holding an “I Am The Real Life Hank Moody” sign, talks excitedly about his love of Californication. “I’ve seen it, like, ten times,” he says, after admitting that he doesn’t really know anything about David Duchovny outside that role.

Duchovny is perfectly aware of the fandom that surrounds him and knows that the huge following he’s developed through his acting is part of the reason why he’s able to tour as musician. “I don’t feel like my album got any exposure on the radio, so I think the only people who are going to really know what they’re going to hear are people that are going to come [to the show] because they like me already, or they know me already,” he tells me. But that doesn’t discourage at him at all; he enjoys music and, after picking up a guitar just a few years ago (“I had time,” is the simple explanation he offers), kept up with it. “I love music, but it wasn’t like I wanted to perform it,” he says, explaining his motivations for learning to play. “I just wanted to have it in my life.”

At first, Duchovny “didn’t want anybody to hear me sing,” but as he played more and more, his confidence grew. He still doesn’t believe his chops are totally there yet, though, and is upfront about his musical abilities: “I’m not like, a prodigy,” he says. “I’m decent. I’ve got decent rhythm. My fingers work OK. I don’t pick, I don’t play lead — these are things that I want to do — but I know enough chords to write songs. As I become a better musician, I think my songs could get better, but I also think they could get worse because you start throwing in funky chords that just don’t belong in there.”

David Duchovny’s first album, Hell or Highwater, evokes some of his favorite musicians: Bob Dylan, The Beatles, R.E.M. (He also cites funk and Motown, “though I don’t think you can hear it on the album because I wasn’t ready to sing that way.” In some live shows, he covers Sly & The Family Stone’s “Thank You.”) Hell or Highwater is a pleasant record, largely free of pretension and complications, the sort of album you might not often yearn to listen to but won’t change when it comes up on shuffle. I use the phrase “dad rock” during our interview — a description Duchovny jokingly calls “the nicest insult,” though he agrees his sound is “the sound that your dads like” — but that’s not exactly it, either. “Dad rock” tends to describe older bands that are still popular; Duchovny is a brand-new act, despite being 55 years old.

It’s a peculiar age to begin something new, but Duchovny seems to be having a bit of a late-in-life creative renaissance. In February, he released his debut novel Holy Cow; Hell or Highwater came out a few months later, in May. “It was a combination of having time, Californication ending, and my kids getting older,” Duchovny explains. “I’ve always wanted to write a novel or two or more. And then music just kinda came out of the blue.” Writing is the common thread here — he also wrote the screenplay for House of D, as well as a few episodes of The X-Files. It’s something that Duchovny gravitates toward, and he feels especially protective over his lyrics.

“I haven’t written a throwaway lyrical song yet,” he says, before adding, “Maybe I should. It’d be catchier. Just like, rhyme ‘night’ with ‘right’ and ‘excite’ and get the hell out of there.” But that doesn’t seem likely, considering how important music is to Duchovny. “I think [writing lyrics] is very different from acting,” he told me, “mostly because I’m saying my own words, and it’s my own music, and it’s me — not me filtered through whatever role I’m doing. It feels a lot more vulnerable, but on the other hand, if someone doesn’t like it, it’s not as painful because it’s exactly what I meant it to be. So it’s like, well, you either like it or you don’t but I didn’t try to make it any different to try and make you like it.”

Despite being 55 years old, Duchovny isn’t so different from every other young musician just starting out. He taught himself to play guitar by looking at basic chord structures and realizing how often they were consistent throughout the genres. He wasn’t a confident singer in the beginning (but is more comfortable on stage now), so he has a vocal coach of sorts and does exercises every day. He thought the sound of his own voice in the studio was “painful.” And he even uses a phone app for guitar tuning, comparing getting a string just right to playing a video game.

A David Duchovny performance is a strange experience. I have never been to a One Direction show, but I imagine it would be something like this, with the teen devotees replaced by 20- and 30- and 40-somethings who scream in between every song and wave around empty beer cups. Someone even throws her panties at the stage. Duchovny is charming as always when he reminisces about growing up near Webster Hall and makes, well, dad jokes about the Mets (“I could listen to this in a car with my dad,” a friend tells me during his set). His merchandise includes shot glasses and a T-shirt with a giant picture of Duchovny as a child (the aforementioned friend goes home with both), and he even performs an odd — but pretty solid — cover of The Flaming Lips’ “Yoshimi Battles the Pink Robots Part 1.” His set is a bit messy, but that’s part of its charm: Duchovny is constantly trying to see what sticks, and if something doesn’t work, he has a million back-up plans.