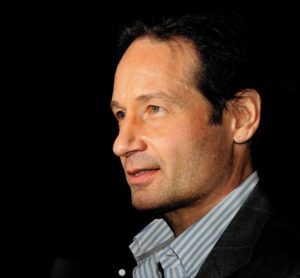 What happens when a famous actor with an English degree decides to write a book? David Duchovny has given us one possible outcome with his debut, “Holy Cow,” about a cow named Elsie Bovary who makes a discovery that will send her fleeing for her life, away from the small farm in upstate New York where she has lived since birth, the only home she has ever known, and into the great unknown.

It all happens kind of innocently enough: Curious as she is, Elsie likes looking into the farmer’s house, where more often than not the family sits around a “Box God,” which, as she notes “is not just one god, but many gods in one box” that comes with “a magic plastic wand” that allows humans to “switch from god to god at any given moment.” Peering through the window of the farmer’s home one day, Elsie sees the family crowded around the “Box God,” as usual. But it’s what comes up on the screen of the “Box God” that sends Elsie into a depression. There on the screen, revealed for all the world to see, is Elsie’s future, laid out quite starkly: a screenshot of “lifeless carcasses of cows being hung up on big metal hooks and cut up, stripped of skin and dismembered like in a horror movie, blood everywhere, all I remember is blood.”

But if it’s the “Box God” that unravels Elsie’s world altogether, it’s the same “Box God” that offers her a solution in its depictions of a faraway place called India, where cows are sacred and treated like gods. The rest of the book has Elsie — along with a pig who goes from Jerry to Shalom and a turkey named Tom — plotting and carrying out their outlandish travels to their destinations of choice: India, Israel and Turkey, respectively.

It’s perhaps no surprise that this book is short on nuance, and maybe that’s the point: to put things in stark terms, to tell it like it is, or at least like the author — a former vegetarian who is now pescetarian — thinks it is. But it doesn’t seem too much to ask of a book like this, whose very title and premise suggest a hilarious read, that it be truly funny. And yet, consistently the book falls short as a work of humor. Instead, it opts for the grotesque — a pig undergoing circumcision out of gratitude to the Jews who won’t consume his flesh; elsewhere Elsie, Tom and Shalom, plus a camel, get in the way of feuding Jews and Arabs in the Middle East and manage to get both sides to join forces in mutual abhorrence of the pig.

As narrator, Elsie has the voice of a precocious preteen who hasn’t yet learned how to filter. She waxes but isn’t very poetic, as when she describes the domestic dog: “they’re neither here nor there, neither fully animal nor fully human; they’re caught somewhere between wolf and man, wild and mild.” Most of her insights feel trite, and when she describes the television as “a strange god that instead of bringing people together, divides them,” the critique comes off as particularly disingenuous given that Duchovny has made a career — and a life — on the small screen. Similarly, the insistence that “humans have to earn the right to be called animals again,” feels rather too forced.

Acting is front and center in this book whose narrator self-consciously, and comically, promotes the work as a potential screenplay, with repeated asides about screening instructions and even product promotion. Indeed, much of the writing that falls flat on the page seems like it might have been better suited to the screen, or to a children’s book, as when Elsie declares: “I can no longer be part of the herd. I want to be heard.”

In the world of Elsie, where the only god is Mother Earth, the “only thing that offends … god is waste and pollution, not words and pictures and jokes.” But even words need to be used wisely, discriminantly, or they risk going unheard.