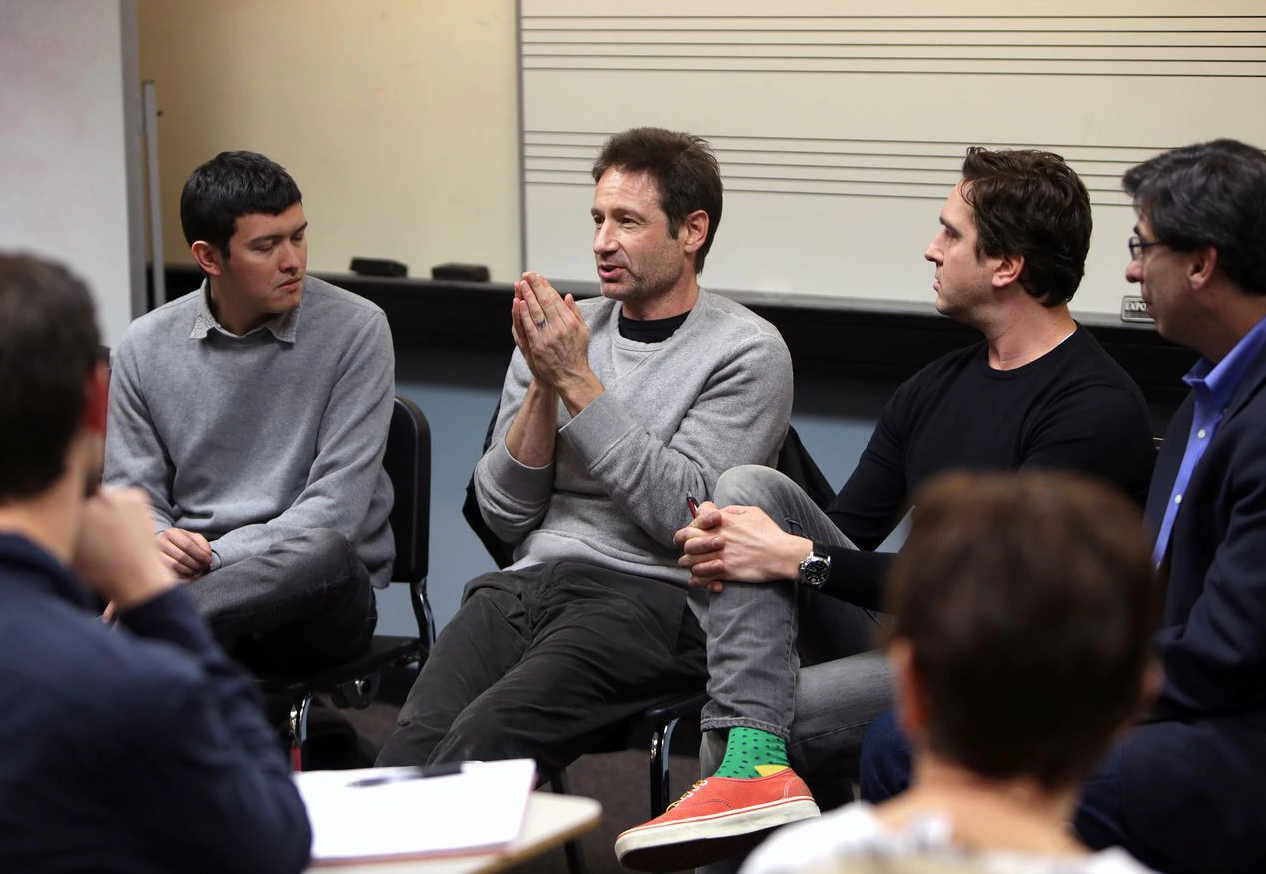 Actor David Duchovny, best known for his roles as FBI agent/conspiracist Fox Mulder on “The X Files” and lothario/novelist Hank Moody on “Californication,” will put his acting career on hold next year to release a double album on the Boston label ThinkSay Records. On Thursday, the actor-turned-musician, his producer, Berklee grad Colin Lee, as well as ThinkSay president Brad Davidson, spoke to a class of Berklee students about their collaborative process. “I never expected any of this to happen,” Duchovny said to the classroom of students and photographers, “I’m not a musician. . . . It’s kind of a dream for me.” During the session, Duchovny revealed that he has always had a penchant for poetry, so writing lyrics was a natural next step. When Davidson, a former executive for Warner Bros. and Columbia Records, first heard demos of Duchovny’s songs, he said it had a “[Bob] Dylan-esque, Lou Reed, R.E.M. feel.” “David is really the album we’re focusing on this year,” he said.

The album, titled “Hell or Highwater,” will be released in March, and Duchovny’s five-piece backing band is composed entirely of Berklee graduates. “David’s been very much involved in the whole process: meeting with the band, working on the songs together, directing how he really wants things to sound,” said Mitchell Stewart, the band’s bassist. “He’s super humble and super open to collaborating and just making sure that everything is the best product it can be. Every time he gets into the studio he gets into this mode where it’s just good energy.”

“Music has always been a part of my life,” Duchovny told the students. “and the fact that I get to make it now . . . I’m happy.”

Later in 2015, Duchovny will star in the NBC vehicle “Aquarius.” Set in the late ’60s, it follows square Sergeant Sam Hodiak (Duchovny) and his rebellious partner as they track infamous serial killer Charles Manson. He’ll also have a book published in February, the allegorical “Holy Cow: A Modern-Day Dairy Tale,” which is about a group of chatty farm animals. Duchovny said of his 2015 lineup, “It doesn’t feel that busy to me.”