Books Live provides a quick peek into David’s upcoming book Holy Cow, along with some insight from David himself. 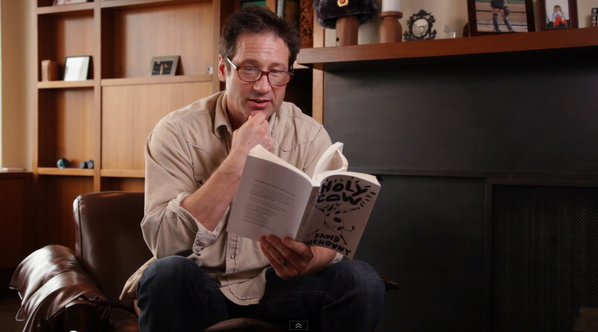 We have no idea how we missed this on our list of books to look out for in 2015, but David Duchovny has written a novel.

It’s called Holy Cow – which oddly enough is precisely the reaction we had when we heard the news – and the former X-Files heart-throb says, modestly, that it’s “like Charlotte’s Web or Animal Farm, if I’m lucky”.

Described by his publisher as “a comic delight that will thrill fans of Jasper Fforde and Ben Aaronovitch”, and by the LA Times as “a loopy fairy tale”, Holy Cow is the story of a cow from Upstate New York who decides to travel to India. She is joined by a Jewish pig and a turkey.

It’s due out on 3 February.

Back in the day, Duchovny wrote his senior thesis at Princeton on Samuel Beckett – it was entitled “The Schizophrenic Critique of Pure Reason in Beckett’s Early Novels” – and then went to Yale to do his doctorate, but as he admits to the LA Times: “I didn’t write my dissertation, so I don’t have a PhD.”

In an interview with The New York Times, however, Duchovny says his writing style was not influenced by the Irish playwright: “I still like language a little too much to call myself Beckettian. He is very austere, and I like fooling around with words. I guess I’m more Joycean, although that’ll sound really pretentious.”

If the excerpt below isn’t enough Duchov for you, you’ll be pleased to know that in addition to the confirmed return of Twin Peaks and the rumoured return of The X-Files, Duchovny is also releasing an album this year.

Head to Books Live’s article for the book excerpt and a live reading by David!