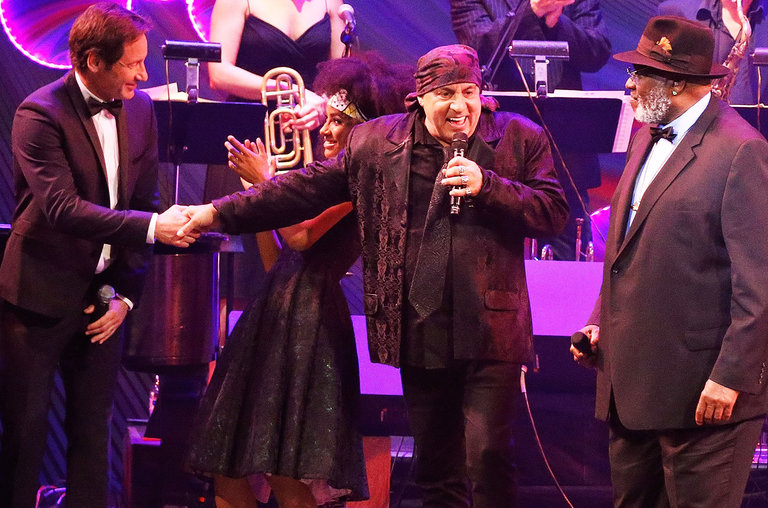 Serving as both a fundraiser and a tribute to the late John Lennon, the Kennedy Center’s spring gala on Monday (May 8) night was entitled Come Together — a fitting name for an event that brought together a broad swath of artists, including Corinne Bailey Ra​e, Judy Collins, Shawn Colvin, Jim James, Amos Lee, Taj Mahal, Esperanza Spalding and Steven Van Zandt.

Master of ceremonies David Duchovny also attempted to weave the theme into his opener. Noting he was addressing “the 500-pound red-and-blue gorilla in the room,” he said, “We are not going to make this a political event.” Then proudly sharing his “liberal Hollywood status” he quickly added, “I don’t believe politics should be in the arts, but the arts should be in politics.”

It was a message that likely wasn’t lost on at least half of the bipartisan room. Whether the decision to honor Lennon this year was a direct response to the current administration, an attempt to find peace in discordant times or a little bit of both, it’s pretty tough to experience his music without any political reckoning.

The sheer volume of Lennon’s catalog meant many a favorite tune didn’t make the cut. Hats off to T Bone Burnett, who served as executive music director, and music director David Mansfield for delivering more than 90 minutes of instant tribute karma. Many of the artists took the stage in iconic circular specs, which also figured prominently in a set design of swirling imagery and color.

The night kicked off with a performance “Come Together” by Taj Mahal, Colvin, James and Duchovny, and was followed by its share of standouts: Rae soaring on “Don’t Let Me Down,” Spalding shaking the balconies on “Mother” while simultaneously taming a massive upright bass, and James delivering a very Lennon-esque “Jealous.” Judy Collins singing “In My Life”? Yeah, she’s still got it.

Van Zandt delivered the most raucous performances — at least as raucous as this crowd was going to get — with “Working Class Hero” and “Revolution.” He introduced the latter with a deadpan, “It’s rattle-your-jewelry time.”

While most performers gave fairly straightforward interpretations, Lee — who immersed himself in Lennon’s words and music in preparation — slowed the tempo of “Help” in a soulful, bluesy rendition. He also performed a pristine “Imagine,” on which he was joined by Rae.

“I wanted to dig into the material and see if there was something I could add,” he tells Billboard. “I have so much respect for him; he legitimately is one of the people who changed the world. For “Help,” Lee says he’d read an interview where Lennon said he’d envisioned the song as a midtempo ballad. “And the lyrics are so heavy,” Lee says. “I came up with an interesting arrangement… I don’t make it really dramatic and slow, it’s more of an aesthetic.

“Listening to his solo stuff was almost like reading his biography,” Lee adds. “I was in awe of how vulnerable he was willing to be with his process, and how free he was. He just didn’t really give a shit. For someone who spent the entirety of their adult life under an enormous lens, he was still able to be self-generated in his art and his perception of who he wanted to be.”

Colvin, whose version of “You’ve Got To Hide Your Love Away” showcased her beautiful vocals, says the Kennedy Center had her at hello. “I was asked, and you don’t say no to them, and you don’t say no to a John Lennon tribute,” she says. “The Beatles were and are an essential, crucial part of my life, and John Lennon’s brilliance is something I marvel at continually.”

An ensemble performance of “All You Need Is Love” brought the evening to a confetti-sprinkled close. The spring gala raised $2 million, a portion of which will be used to fund a national arts education program, according to the Kennedy Center.